The client generated sales of Lady Antebellum’s Golden CD in both hard copy and digital download while promoting the band’s appearance at the Country Music Awards and gathering a database of the group’s fans’ emails and/or Facebook followers.

Ventura developed a “Golden Ticket” Giveaway instant win game to promote Lady Antebellum’s Golden CD. To play, the consumer obtained a code by purchasing or downloading the CD (or requesting a free code via email.) The consumer then visited the designated URL or connected via Facebook. After accepting or declining a promotional offer a winning or non-winning message was displayed. The consumer had a chance to win exciting prizes instantly such as: five grand prizes of a VIP trip for two to attend the Country Music Awards with a private jet flight and backstage passes, 10 second place prizes of Lady Antebellum concert tickets or additional prize levels of autographed CDs or other band merchandise. All unclaimed prizes were awarded in a second chance drawing among all those who played.

The client’s pre-established goals were achieved. 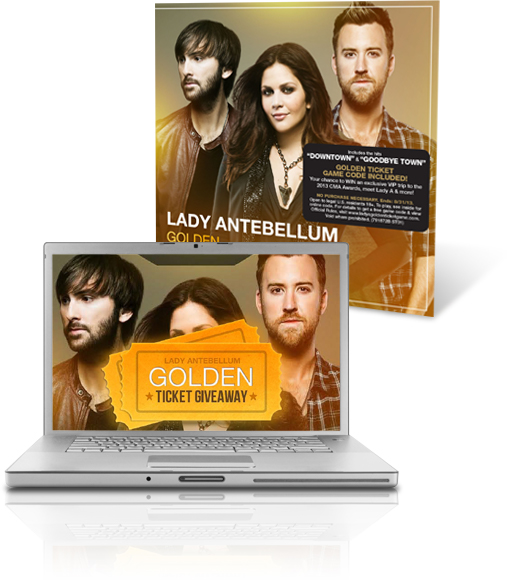